Two weeks of #TED, games and thoughts on #e-learning, the world and everything

WARNING: this will be a rant, followed by some spiritual medicine courtesy of TED; it will also have some good links; and it will stop short of a book review. Finally, it will present you with an uplifting conclusion and, because I’ve been thinking about it for too long and don’t want to break it up, it’ll be a stream of consciousness thing (which is fine by me because I’m in some great company there). Just thought I’d let you know at the start 😉

Two weeks is a rather long time to be away from a computer; though not from technology completely (thank goodness for the TED podcast and GPS on a smartphone; not related, in case you’re wondering). 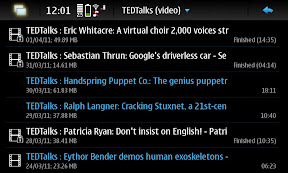 TED talks on my phone - perfect compliment to any trip

It’s also potentially not the best idea when you’re rather worked up over what to do to fix the world. You see, I’d been involved in a couple of Twitter #lrnchat sessions where the issue of making learning the easiest, most painless and enjoyable experience in the world popped up a number of times and I was told off a little when I suggested that maybe by doing that we’re messing with people’s heads too much.

Don’t get me wrong, it’s been my personal project to find out ways to make my messages stick (yep, you’ve guessed it: get a copy of Made to stick. Why? See the next section.) and my presentations attract the eye and the brain (comments about Presentation Zen and slide:ology below). I am also really interested in game design, augmented reality, and cool devices like the Microsoft Kinect, so I’m not a hardcore oldschooler. However, in my view, going out of one’s way to make learning nothing but fun is perpetuating a society which I have doubts about: one where if something is not fun and easy, then it’s not worth pursuing; one which was so grateful when the iPhone came out because it meant people wouldn’t need to think laterally to solve problems anymore – they would just rely on an app.

I guess I don’t like broken technology any more than the next person, but in a way not having perfect tech has taught me how to deal with people. Like most of you out there, I’ve got years of scratching my head trying to understand why an application wouldn’t work in the same way for my users in what appear to be identical circumstances. Yet I’m no longer annoyed when that happens. I embrace the challenge, try to find several ways to fix the problem – some wackier than others – and I like to think that this whole inconvenience may in fact help prevent the onset of Alzheimer’s. I have also developed a curiosity for taking tech apart, seeing what makes it tick, and then research how to change it (or even simply how to put it back together without leaving out components). If you ask me, these are quite useful transferrable skills which everyone can get if only they could get in the right frame of mind. You see, I think in a way we’re all broken tech and working with faulty machinery has taught me to listen more carefully, put myself in other people’s shoes and make suggestions that actually work rather than waste folks’ time.

As if this wasn’t heavy enough for my little brain, I then also watched Katyn. I’m telling you: being reminded how easily people can be manipulated in killing each other does wonders for an instructional designer… What hope is there in a society that doesn’t value early education from BOTH parents+society AND schools any more (or if it does, it’s in such an obscure way that escapes me)? How can you expect kindness and rebellion against manipulative scum when some people rarely see a book, rarely hear a good word, and even more rarely get into a debate or an intellectual argument which doesn’t end in broken bottles, fights, and much, much worse? How can I ignore that this happens still and get on with designing interactive, multimedia, scenario-based and all the other buzzwords training for the privileged few who have been exposed to alternatives? And how can I do it knowing that even some of these people will be easily converted if need be (the Stanford prison experiment is just one example)? Better yet: why am I still interested to check out what online training the army runs? THE ARMY, whose only decent contributions to society ever in my view have been to commission some research into surveillance equipment which enabled David Attenborough and his team to film wildlife without disturbing it, as well as to invest in machine translation and natural language processing (although for the wrong reasons)… With these in mind I left for two weeks to get some vitamin D, and have lots of cool talks with my wife while strolling through beautiful Tuscany. 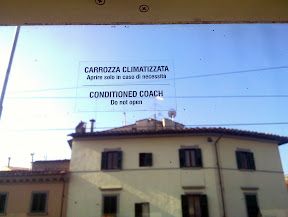 Oh, my this is getting outrageously long. Consequently, here are three talks that have restored/strengthened some of my faith:

The links (an annotated bibliography)

I had a few books with me, but this is the one I really wanted to finish (and I did, hurray!): Gamestorming: A Playbook for Innovators, Rulebreakers, and Changemakers. It took a little longer than usual because, after all, I was on holiday (see illustrative image below), but I am really grateful to Jay Cross for mentioning this book in his Informal Learning (another brilliant, brilliant, publication – my super quick take on it is embedded in this post). 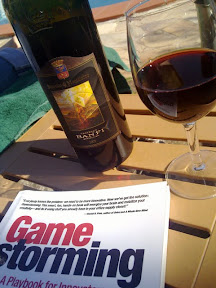 A good book and wine; well, somebody has got to do it...

I was looking for ideas of activities to spice up my training sessions and I ended up with quite a few ideas about much bigger things: the upcoming European Articulate Conference, and even the way things happen at my University. Those of you who have been involved in training for a while will recognise quite a lot of these games, even though they are mainly applied to boardroom meetings. A few others will be new ones, so brownies to the authors there, too.

The real value of the book for me, however, is the beginning section which talks about the reasons for using such games and also provides a crash course into visual thinking (yep, it teaches you to draw in a few pages and does a really good job of it, too). I’d say this book, together with Informal Learning and Made to Stick, should be on every manager’s bookshelf (or e-book reader – although I understand some of the e-book versions lack the illustrations which is a great shame) and every trainer should be familiar with them, too.

It is a daunting thought that all of a sudden, there are no more reasons for failing to reach people – the games and scenarios detailed in there three publications cover education, industry, civil servants, you name it. It is also daunting to acknowledge that if you treat people like idiots, they will behave accordingly, and therefore you should loosen/remove some of the rules and regulations in place and give people credit.

Everyone likes a cool idea dressed up as a compelling story from a presenter who cares, and they’re more than capable to look after themselves for a while after that, even if they may think initially that they need a lot of hand-holding.

I believe the proportion of information takers/users/creators is changing and I see that on the #lrnchat, #edtech and #articulate Twitter communities I follow. I am really psyched about doing funky things with the learning technologists’ community that I’ve been trying to hold together in my institution and I have the Articulate e-Learning Heroes as a model. What can I say? It’s good to have friends 🙂 On #education, life and #TED - a bit of a rant, really...
Ok, ok, I guess a MacBook wouldn't do one much harm... 😉
Time-lapse videos: fun and easy to make (eventually 😉 #edtech #uoltech #articulate